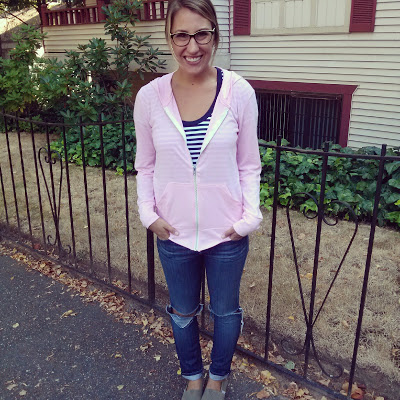 t-shirt: splendid, sweatshirt sweater: alternative apparel, jeans: opal, shoes: toms
savoring these last few days of being able to grunge-it-up.
how i will miss wearing sweats 4/5 days per week… and torn jeans.
although i am somewhat looking forward to enjoying professional-attire.
it might make this here blog a bit more interesting. or not.
one of my favorite things about tom? (before i tell you what a cruel prank he played on me)
he refers to sweatshirts or hoodies as “sweaters.”
i don’t know if i am just weird, but i think it is adorable.
thus, i think i shall call them sweaters, too (as seen above).
and now for the joke.
my biggest phobia? birds. i am absolutely terrified of them.
it started a few years ago and has gradually become exponentially worse.
sometimes i cry if they get too close.
this past weekend while in eastern washington,
tom hit two birds with his dad’s giant truck.
one went flying off into the abyss, but the second was not so lucky…
it was stuck to the grill on the front of the truck (blood and guts included).
while turning into the driveway,
said bird FELL OFF THE FRONT OF THE TRUCK.
and would you like to know what tom-the-meanie did?
PULLED OVER, GOT OUT, AND PICKED UP THE BIRD.
he then proceeded to walk to my side of the car,
holding the dead creature by its’ leg,
and swing it around.
(me inside truck: cue panic attack)
after scolding him and threatening to break up with him if he brought that darn thing any closer to me, HE PUT IT IN THE BED OF THE TRUCK.
you can bet i got out of the truck and ran the rest of the way home.
i then locked myself in his room until i felt somewhat safe.
tom and his dad jokingly said they were going to pluck the bird so we could eat it for dinner.
not a funny joke if you ask me.
i fear i will be plagued with my bird phobia until the end of time.
thankfully i was not forced to eat bird that weekend.
xoxo.