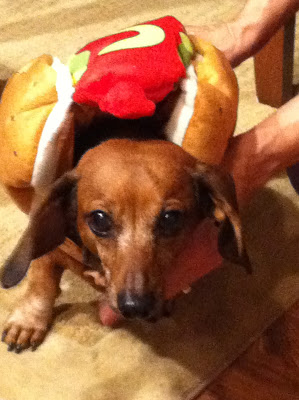 (hanging out in her hot dog suit)
…her
…seriously?
this cute pup – a bully? i don’t think so.
according to the a****** in room 501 of my parent’s condo,
sweet, loving, adorable bailey is a “bully.”
is he insane?
he claims she barks incessently,
disrupts his “peaceful living,”
and makes all the other dogs in the complex bark.
she looks pretty ferocious, don’t you think?
when taking care of the pup last weekend,
we ran into aforementioned a****** and he said he was going to kick bailey in the jaw
so that she could never bark again.
WHAT?!
not okay, sir. not okay.
we are going to kick you in the jaw and then kick you the heck out of here.
if bailey could speak, i know she would agree.
she is old and happy and excited to see people,
thus she will sometimes bark.
in addition, condo living is completely new to her.
she previously lived in a house with the same four people coming and going each day.
now it is her and the empty nesters (my parents) in a smaller space,
surrounded by new faces.
sir, it is called adjusting;
give her a chance.
and do not ever threaten my pup again.
i think you’re the true bully in this situation.
xoxo, bailey & megan